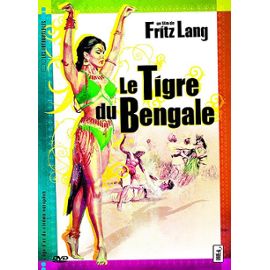 When I was a graduate student in Paris, in 1980 and 1981, I walked home from classes and always passed a cinema, I think on the rue de Temple, that never changed its bill. Fritz Lang’s Bengal Tiger showed there for at least an entire year, and by the end of my stay I had come to count on the dependability of that one film at that same cinema week after week. When I saw The Bengal Tiger, there were probably only six or seven people in the audience, and I still remember the young woman who worked at the ticket booth, always smoking because she had nothing else to do. Practically no one was buying tickets to see the movie.

During that year in Paris, every Wednesday I bought the latest edition of Pariscope, which had complete listings of all of the films playing in the city and in the suburbs, a sort of weekly record of how new films and classics came and went and circulated through different neighborhoods. This was the kind of movement I had come to expect from growing up in Los Angeles, where subsequent-run theatres changed their bills every Wednesday, except when a popular movie might be held over, and where new movies rarely played in the first-run houses for more than a few weeks. I never really learned why, in Paris, most cinemas had a regular turnover while a few never seemed to change. Someone told me that the cinema on rue de Temple and others like it were subsidized by the government, and so didn’t have to change films, but that never seemed like a fully satisfying answer. Why did The Bengal Tiger never leave?

I’m fairly certain that’s when I began thinking about this project, about how movies circulated through Paris and about the relationships of cinemas to the movies they showed, to their neighborhoods, and to their audiences. I only really began working on it about a dozen years ago, after a trip back to Paris.

While I was there I found an odd shop, called Les Archives de la Presse, on the rue des Archives in the fourth arrondissement, stacked floor to ceiling with old French magazines. I went to the movie magazine section and looked through dozens of issues of Pour Vous, a popular film tabloid from the late-1920’s until the Occupation. And on the last page of each issue there was a complete listing of the cinemas in the city, the movies they were showing, and the times they showed.

These listings provided the now long-gone cinematic geography of pre-war Paris. One could chart the ways movies moved through neighborhoods, the development (and closure) of cinemas, and the relative importance of movies to different parts of town (18 cinemas in the peripheral, working-class twentieth arrondissement, none in the first, which was spatially dominated by the Louvre). With these Pour Vous listings as well as some others, and with the availability of other sources, particularly those put online on its Gallica website by the Bibliothèque nationale, I began work on a project examining Parisian film culture from the late-1920’s until around 1950; the cinemas and the movies, the ciné-clubs and the preferred stars, and also the role of film journalism. 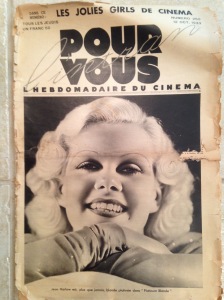 I imagine this blog as an extension of that project. Paris will be at the center, but starting with the capital inevitably leads to the rest of France, to French speaking countries in Europe, and to France’s colonies. I’ve been taking pictures of old cinemas on subsequent trips to Paris, and also of the buildings—and there are many of them—where cinemas used to be.

I’ll be posting short pieces on individual cinemas or on groups of them, on what we can tell about the people who went to the movies in Paris, on the movies that played there as well as in Lille, Lyon, or Algiers. There are already some sites that do some similar work. Ross Melnick’s “Cinema Treasures” (http://cinematreasures.org/) offers an encyclopedic look at movie palaces and neighborhood venues around the world. “Cine-Facades” (http://sallesdecinemas.blogspot.com/) archives photographs of cinemas that still exist, and with no small amount of melancholy records those spaces that used to be cinemas. I am indebted to these sites. And I see this one as performing something of an archaeological function, working through layers of history to understand what it meant to go to the movies in Paris.

I’ll begin next time by writing about a movie theatre, the Gaumont-Palace in the eighteenth arrondissement. I hope to provide something of an historical walk through the area, and to try to understand the role of this great cinema palace in its neighborhood and in the city, and the mark it has left many years after its disappearance.