I’ve written about a single cinema in Paris and also about a single film. I’d like to take a step back now, and get a fuller view of the cinematic geography of the city. I’ll be writing subsequent posts about World War Two and after the war, but now I’d like to spend a little time on the 1930’s. I especially want to take a look at the late-1930’s, before the war changed the cinematic—and cultural—landscape of Paris so completely.

Let’s start with a randomly selected week in 1937, from 29 January to 4 February. My reference here will be the weekly La Semaine à Paris, published by the Parisian Tourist Office and including all manner of the city’s cultural activities. In fact, before even getting to movies, I should point out that the possibilities for absorbing culture—high, low, and in between—were seemingly endless in pre-war Paris. For those who sought out live performances, La Semaine for that week lists over thirty theatres in the city. At the Odéon in the fifth arrondissement, audiences could see Eugénie Grandet, from Balzac’s novel, all week, or, not far from the Louvre, see the Comédie-Française present seven different plays, by Molière, Racine, and Dumas fils, among others. There were also more trivial but nonetheless compelling pleasures, for instance Danielle Darrieux’ Paris stage debut in the comedy Jeux Dangereux at the Théâtre Madeleine. There was opera at the Champs-Elysées (Beethoven’s Fidelio, Gluck’s Alceste, Saint-Saëns Samson et Delilah) and also at the Opéra-Comique in the second arrondissement (Carmen, Les Contes d’Hoffmann, La Vie de Bohème).

There were around twenty music halls in Paris, with performers unknown to us today (Betty-Hoop, Peggy Vere, Maguy Zégo) as well as those who retain cultural currency 80 years later (the great chanteuse Fréhel, for instance, and at the Folies-Bergère in the ninth arrondissement, Josephine Baker). That same week in late-January and early-February there were three circuses performing in Paris, any number of concerts, and dozens of museum and art gallery exhibitions (a showing of Roubens at L’Orangerie and Ingres at the Louvre among many, many others).   But across the city, and in numbers far greater than any other brand of cultural uplift or entertainment, there were movies.

In 1937 there were about 230 cinemas in Paris’ twenty arrondissements, and there was a general but inconsistent correspondence between number of cinemas and population. In the 1936 census, which recorded almost three million people in the city, the eighteenth had by far highest population of any arrondissement, and that was also the site for twenty cinemas, the most in the city and the same as the densely populated seventeenth. The third and fourth, with far fewer people, had only five cinemas in the first instance and four in the second. But the second arrondissement, one of the least densely populated areas of the city, had ten cinemas.

A map of Paris by arrondissement

We tend to think of Paris as divided by the Seine, which runs across the city, with those areas more or less above the river on the Right Bank, and those below on the Left. But we might also think of the city as divided the other way, by a line going from top to bottom, with the more well-heeled neighborhoods to the left of that line, the less fashionable to the right. And as much as population, this explains a good deal about the location of the cinemas of Paris. While there were major, first-run cinemas all over the city, most of them were in those ritzy neighborhoods in the western half, which was precisely the case with most of those cinemas in the second arrondissement. Seven new films opened in Paris during that week of 29 January, all of them in major cinemas in the upscale second, sixth, eighth, and ninth arrondissements. Most of those cinemas showed only one film rather than two. But if we were to take a look at the cinemas in the decidedly working class twentieth arrondissement, Menilmontant, on the eastern edge of the city, all thirteen of the cinemas there showed double-bills, mostly of subsequent-run films.

The exhibition business in Paris can be a little difficult to decipher. From the names of cinemas alone, there were certainly those sites that were individual, independent locations. But there also seem to have been chains, for instance the Palace cinemas, as in the Cluny-Palace, the Crystal-Palace, and the Cyrano-Palace. Other cinemas apparently were parts of vertically integrated companies, along the lines of the Hollywood model, with the two Gaumont cinemas in Paris, as well as the Royal-Pathé, the Marivaux-Pathé, and the Pathé-Orléans, having links to larger organizations that produced and distributed films in addition to exhibiting them. There was also at least once cinema in Paris, the Paramount, that was directly affiliated with an American film company.

Of those seven new films opening in Paris that week, two were from Hollywood: La Brute Magnifique (The Magnificent Brute, with Victor McGlaglen) and Tarzan s’évade (Tarzan Escapes, with Johnny Weismuller and Maureen O’Sullivan). Another was British: Les Hommes ne sont pas des Dieux (Men are not Gods, with Miriam Hopkins and Rex Harrison). One film was Russian: Dubrovsky, based on the Pushkin novel. And three of the movies were French: La Maison d’en face, Prends la route, and the great Jean Gabin vehicle, Pépé le Moko. 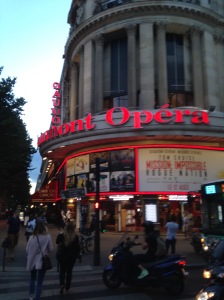 The Paramount on 2 boulevard des Capucines in the 9th arrondissement, in its current incarnation as the Gaumont-Opéra cinema

American films played all over the city, but they tended to open at around two dozen cinemas that specialized in Hollywood movies, for instance the Helder on the boulevard des Italiens in the 9th arrondissement, where the Frank Capra film Mr. Deeds Goes to Town (L’extravagant M. Deeds) was in the midst of an extended run during that last week in January. The Studio de l’Étoile cinema in the 8th arrondissement could be counted on to show German films, while the Pantheon, the Comoedia, and Studio Parnasse (where Dubrovsky opened) all provided fans with Russian movies.

At least 90 films played in Paris that week, not counting the ciné-clubs (the subject of a future post) or the dozen or so cinemas that specialized in newsreels and other documentaries. Most of those movies were French, but of course they also came from Italy, Great Britain, Germany, and the USSR, and at least thirty, by far the largest number of foreign films, had been made at the Hollywood studios. When foreign films opened, they usually played in subtitled rather than dubbed prints. Of those thirty American films in Paris that week, at least twenty of them were shown that way; two of them, The General Died at Dawn (Le général est mort a l’aube) and The Ghost Goes West (Fântome à Vendre) showed in both subtitled and dubbed prints at different cinemas. Most of those films, though, played at just one cinema, although a popular reissue like A Tale of Two Cities (Le Marquis de Saint-Evremont) played all over town, in nine different cinemas in eight different arrondissements.

If city-wide saturation is an indication, however, nothing seems to have appealed to Parisians at the time more than a Jean Gabin film. As I mentioned, Pépé le Moko opened that week at the Marivaux-Pathé in the second arrondissement. Les Bas Fonds, from 1936 and one of the films Gabin made with Jean Renoir, was still in its months-long first-run at the Max Linder cinema in the ninth arrondissement. Also from 1936, La belle équipe had recently left its exclusive run and now was all over Paris, in eighteen different cinemas, more than any film in the city, as well as another one in the nearby Neuilly suburb. 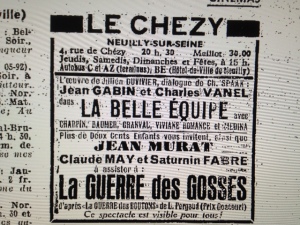 This interest in Gabin makes sense to us today, of course, because we understand the full history of the star’s powerful connection to Paris. But playing almost as widely as La belle équipe was another French film unknown to us now, Au service du tzar, from 1936, which showed in sixteen cinemas across the city. Neither the director, Pierre Billon, nor any of the stars, except perhaps to some small degree Junie Astor, have much caché today. So even more than any individual film or star, we can see just how fully the cinema in general dominated the cinematic geography of Paris during this period leading up to the war.