All four cinemas in the fourth arrondissement were just a few blocks apart in the 1930’s. If you walked the right angle formed by rue de Rivoli and boulevard de Sebastopol, which forms something of a southwestern border of the neighborhood, and took just a few short detours, you could see movies in all of the cinemas in just one day. Your direction might depend on whether you started that day or ended it at the Rivoli-Cinéma at 80 rue de Rivoli, which opened at ten in the morning and held its last screening at midnight, while the other cinemas had more modest—and typical—hours, starting at 2:00 or 2:30 and with final screenings around 8:00.

The fourth arrondissement is at the center of the city on the right bank, and it is also the administrative center, with the Hôtel de Ville, the city hall of Paris, dominating the space there. The bureaucrats at the Hôtel de Ville typically have lived elsewhere, and the fourth has always had an interesting mix of people. The Marais, for instance, which runs across the third and fourth arrondissements, was for decades starting in the late-nineteenth century the city’s primary Jewish community. But the fourth was never that densely populated, with only around 70,000 people there in the mid-1930’s, and this certainly had something to do with the relative scarcity of cinemas there.

The shaded area shows the fourth arrondissement in Paris

In the very early-thirties, the fourth had only three cinemas: the Cyrano at 60 boulevard de Sebastapol, the Saint-Paul at 73 rue St. Antoine, and the Hôtel de Ville at 20 rue de Temple. The fourth cinema arrived a few years later, the Rivoli, at 80 rue de Rivoli. I’d like to concentrate on the Cinéma de l’Hôtel de Ville, in part because all of the cinemas in the arrondissement functioned in pretty much the same way, and also for sentimental reasons. When I was a graduate student in Paris many years ago I lived on rue Ste. Croix de la Bretonnerie, just a few blocks away from the Cinéma de l’Hôtel de Ville, and I passed it almost every day and went to movies there now and again.

The cinema has occupied that site, under one name or another, since 1914. It certainly seems small from the outside, and I don’t remember it being very spacious inside, with perhaps 200 seats or so. And for most of its history, like all the other cinemas in the fourth, this was very much a subsequent-run exhibition site rather than a place to see movies just as they were opening.

The Luminor Hôtel de Ville in 2015

A few random weeks from the period show how movies worked their way there. During the week of 9 March 1934, Toi que j’adore opened at the swank Aubert-Palace on the boulevard des Italiens in the ninth arrondissement. The film was a high-quality but also conventional French film from the period, with two major stars, Jean Murat and particularly Edwige Feuillère, and it was one of those hybrids of the era, a German film made in French (and it’s not clear that a German version was ever produced).

Toi que j’adore seems to have been a modest success in its opening run, playing at the Aubert for three weeks. The film then disappeared from Paris cinemas for another three weeks, and then opened at the Hôtel de Ville the week of 19 April, on a double-bill with the 1933 Jean Gabin film, Tunnel. Toi que j’adore also appeared that week at other cinemas in Paris, at the Ba-Ta-Clan in the eleventh, the Montrouge and the Ternes in the seventeenth, the Ornano in the eighteenth, and the Pelleport and the Pyrénées in the twentieth. The double-bill played at the Hôtel de Ville for just one week, to be replaced by the 1934 French film Trois Pour Cent and, from Hollywood, Raffles (1930). 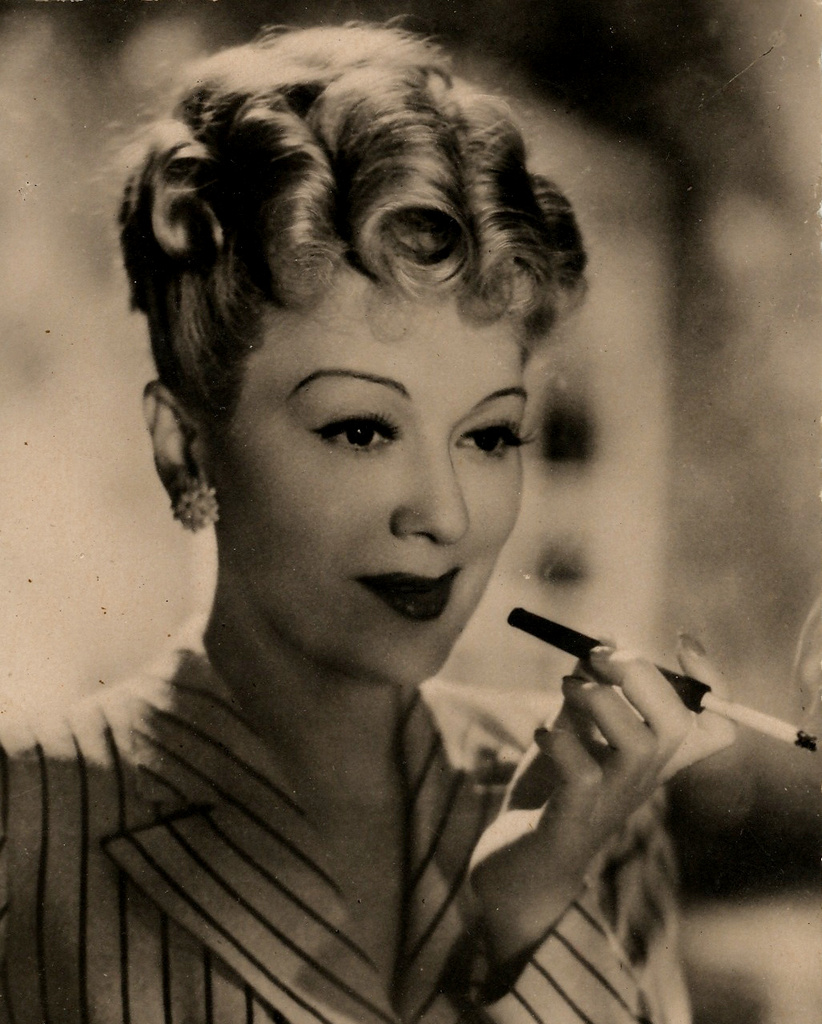 This would seem to indicate at least something systematic about how films went from cinema to cinema in Paris, roughly like the American system of runs, zones, and clearances. But of course the French film industry from the period never seems to have operated systematically at all, something aptly demonstrated by another bill at the Hôtel de Ville about two years later.

In May 1936, Maurice Tourneur’s Justin de Marseille came to the Hôtel de Ville, along with the 1932 Laurel and Hardy feature, Les Sans-Soucis (Pack up Your Troubles). In this case, Tourneur’s film had opened more than a year before, in April 1935 at the Marivaux-Pathé in the second arrondissement, then seems to have disappeared from Paris until December 1935 when it played in a few cinemas, and then vanished again, returning to the city, at the Cinéma de l’Hôtel de Ville, six months later. This was far different from the case of Toi que j’adore but hardly unusual for the neighborhood cinemas of Paris, making it practically impossible for us today to understand the industry’s methods or strategies for distributing films through the city.

Film exhibition in the fourth arrondissement practically stopped throughout World War Two. By January 1940, with the Germans advancing on Paris and so many people leaving the city, all four of the cinemas in the neighborhood had closed, and until the surrender in June only one or two of them reopened to show films now and then, for instance during the week of 13 March 1940, when the Rivoli played Fanny, the 1932 Marcel Pagnol and Marc Allégret film, along with a selection of newsreels.

After the surrender and the temporary closing of all cinemas in Paris, the Nazis reopened exhibition sites only selectively, and ignored most of the neighborhood locations. As far as I can tell, there were no cinemas open in the fourth until the liberation of Paris.

It was a different story there after the war. The population had declined to only around 60,000 people in the fourth, but by the beginning of 1947 there were six cinemas in the arrondissement. In the middle of January of that year, the Cyrano showed a program of cartoons, and all the rest of them showed single films rather than double bills, and all of the movies there were on their subsequent runs through the city: the 1931 French film En bordée, starring Bach and Suzette Comte, at the Cinéac-Rivoli, Albert Préjean in L’Assassin n’est pas coupable (1946) at the Cinéphone-Rivoli, Noel Coward’s L’Esprit s’amuse (Blithe Spirit, from 1945) at the Rivoli, C’est arrivé demain (It Happened Tomorrow [1944], one of René Clair’s Hollywood films), at the Saint-Paul, and Cary Grant and Jean Arthur in Justice des hommes (The Talk of the Town, 1942) at the Cinéma de l’Hôtel de Ville.

By 1989, well after I had gone there for the first time, the Cinéma de l’Hôtel de Ville, now called Le Latina, was the only place to see movies in the fourth, except for the Cinémathêque Française, which for a few years showed films in the Pompidou Center. The architecture of the cinema had changed along with the name, the space now divided into two screening rooms, the Salle Buñuel and the Salle Rossellini. Today, as the Luminor Hôtel de Ville, it is the sole exhibition site in the neighborhood. When I visited Paris in the summer of 2015, the Luminor Hôtel de Ville was sort of an international cinema repertory house rotating seven to ten films each week, including a restored version of Rambo (1982), two Italian films from 2014, Contes Italiens and Mezzanotte, the Brazilian film Casa Grande (2014), the French 2014 thriller Stand, and the just-released French documentary, Dior et moi. 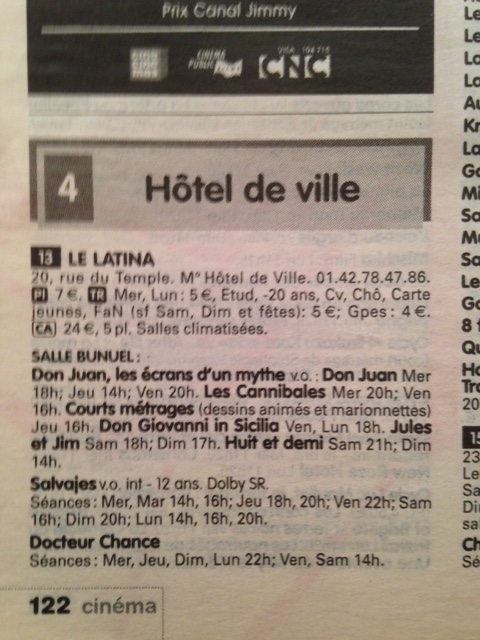 The schedule for Salle Buñuel at Le Latina, for the week of 26 June 2002