“Paris Hideway Coins Money with Silents,” ran the headline on the “Foreign Film News Page” of Variety in an issue from June 1932. The article explained that a “350-seat barn, styled Corso-Opéra, opening from a hole on the boulevard and without sound equipment, is doing comparatively big business by reviving old silent hits.” From what I can tell now, this seems to have been a pretty accurate description, because in a city full of odd cinemas the Corso-Opéra, on the boulevard des Italiens in the second arrondissement, probably was one of the oddest. There were small stands selling men’s and women’s clothing at the entrance to the cinema, while it was only the large film posters outside that indicated it was a cinema at all.

Just a few blocks away, on the boulevard Poissonière, stood one of the grandest cinemas in Paris, the Rex, with seating for almost ten times as many people. The Rex opened in December 1932, having been built by the great film impresario Jacques Haïk, with La Semaine à Paris, which usually duly noted new places in the city to see movies, extolling the florid extravagance of this “cinéma atmosphérique,” with its “starred ceiling…giving us the illusion of an oriental night” (although the reporter complained that too much exotic atmosphere made it a little hard to breathe in the place).

The second arrondissement, more or less in the center of the city and on the right bank, has always been one of the least populated areas in Paris. With the stock exchange located there, the second has been the business center of the city, as well as the home of some of the arcades made famous by Walter Benjamin, including the Passages des Panoramas. The cinemas of the second, however, often have seemed a little out of place there, in the midst of so much high-level commerce on the one hand and on the other the more elegant consumer architecture of the arcades.

By the mid-1930’s there were eleven cinemas in the second, a number that would vary only a little for the rest of the decade. Some were significant first run cinemas; for instance the Ciné-Opéra on the avenue de l’Opéra, where Renoir’s Madame Bovary opened and ran for several months in 1934. The Marivaux-Pathé, just down the block from the Corso-Opéra, showed some reprises as well as new movies (not at all unusual for Parisian “cinemas d’exclusivités”), including some of the most important; Pepé le Moko, with Jean Gabin, premiered there in January 1937. The Rex, for all of its incredible atmosphere, played new films, too, but usually only for a week before they disappeared for just a little while and then fanned out to other cinemas in the city. This apparently made the Rex a version of what, in the United States, would be a less-important first-run house, a notch below the “run-of-the-picture” cinemas where a film might play for weeks on end.

The Rex cinema as it looks today

There were also some cinemas in the second that exclusively showed “actualités,” or newsreels; the Cinéphone, for instance, on the boulevard des Italiens, and also the Cinéac just across the street and specializing in Fox newsreels (and which, in the very early-thirties, and before its conversion to current events, had been the Electric-Palace-Aubert). By the late-1930’s even the great Omnia-Pathé in the second arrondissement, one of the earliest structures in the city built specifically as a cinema, had converted to showing newsreels exclusively.

And then, of course, there was the Corso-Opéra. The Corso did not only show silent films—there was the occasional sound film, and so Variety was mistaken when it reported that the cinema lacked sound equipment—but it did specialize in them, with Buster Keaton in Cadets d’eau douce (Steamboat Bill, Jr. [1928]) on an April 1931 double-bill with Max Linder in L’Etroit mousquetaire (1922), for instance, or an extended 1934 reprise of Chaplin’s Les Lumieres de la ville (City Lights [1931]). Other than the ciné-clubs, there was only one other location in Paris during this time that routinely showed silent films, the Boulevardia cinema in the tenth arrondissement.

By June 1940, and with the German army advancing on Paris, only three cinemas remained open in the second, the Cinéphone, the Ciné-Opéra, and the Rex. Within a year and a half, the Nazis occupying the city had reopened around a half-dozen cinemas there, and made special use of the Marivaux for exclusive runs of major films; as just one example, Arletty’s L’Amant de Borneo opened there in June 1942. The Nazis also turned the Rex into a “Soldatenkino,” one of the ten or so such cinemas in the city specifically for members of the German military, and always in the more well-to-do parts of Paris. And while any number of small, neighborhood cinemas reopened during the Occupation, the Corso-Opéra seems to have remained closed for the duration, perhaps too odd to fit into the Nazis’ plans to “normalize” Parisian culture during the war. 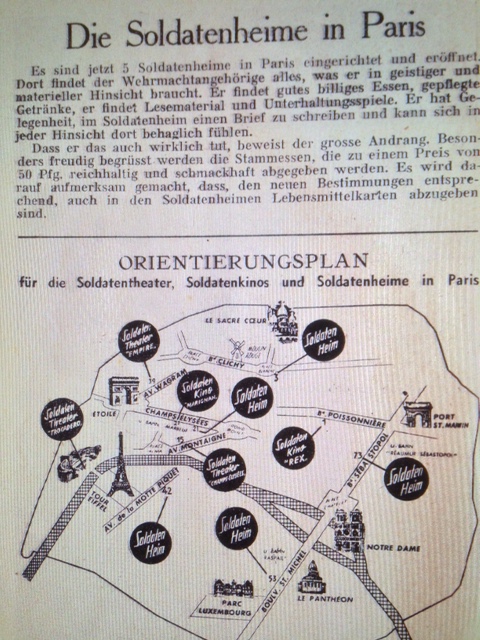 A map of “soldatenkinos,” including the Rex, for German soldiers during the Occupation

Shortly after the Liberation it was business as usual in the second, with around a dozen cinemas showing films. In my listing from January 1947, there was a mix of French and American films. The great Marcel Carné and Jacques Prévert film, Les Portes de la nuit, had just opened at the Marivaux, which probably was still the most important cinema in the arrondissement. The Rex showed Bal des sirens (Bathing Beauty [1944]), which was fairly new in Paris but which I believe had already had its opening run at the Gaumont-Palace in the eighteenth arrondissement. Adieu, chérie, with Danielle Darrieux, and which had opened the previous spring, now played at the Gaumont-Théâtre on the boulevard des Italiens, and Les Desperados (The Desperadoes [1943]), another wartime Hollywood film that had just made its way to Paris, was playing throughout the city, including in the second at the Vivienne. And, of course, the Corso-Opéra had opened, not showing silent films exclusively but still reprising older films. That week in early-1947, the offering was Laurel and Hardy, who always seemed to be popular in Paris, in Les Joyeux compères (Them Thar Hills) from 1934. 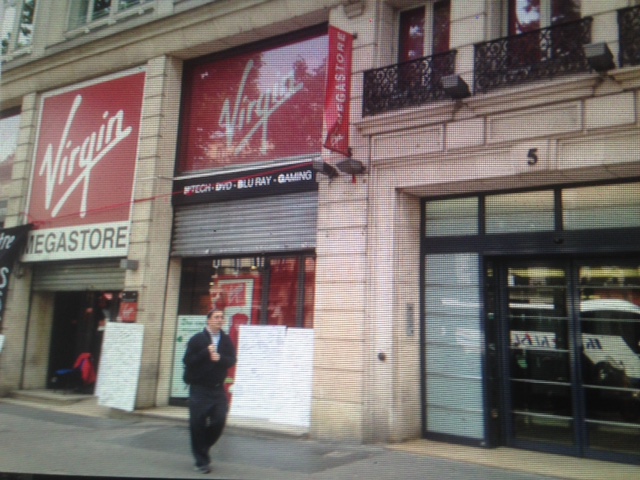 The Virgin Megastore on the site of the Omnia-Pathé

By the late-1980s there were only a half-dozen cinemas in the second, including the Rex, which showed films in its original space while also converting its basement into a hall with several screens. Except for the Impérial on the boulevard des Italiens, the other older locations had all closed. Today, there are just two cinemas in the arrondissement. The Rex remains, with its single screen in the main room and multi-screen basement, but a Starbucks has replaced the Gaumont-Théâtre next door. The Café Gramont now takes up much of the space of the Marivaux cinema, while the Omnia-Pathé has been transformed into a Virgin Megastore. On the site of the Corso-Opèra, Parisians can now get a fast Italian meal at Pizza Pino.

The Pizza Pino, where the Corso-Opéra used to show a mix of silent and early sound films