November 4th 1980 was election day in the United States, and of course it marked the ascendancy not only of Ronald Reagan but of the hardline, mindless conservatism that still plagues us. I voted absentee in that election because I was spending the year Paris, doing graduate study at the Centre Américain du Cinéma. I was also able to forget, for at least a little while, the seemingly inevitable result of the election because I went to the movies that night, to Le Balzac cinema in the eighth arrondissement for a special showing of Baby Doll (1956), announced as “le grand succès d’Elia Kazan.” The screening was sponsored by “L’Association Française de la Critique de Cinéma,” the national film critics association, and I was able to attend because a friend of a friend, who was a member of the association, invited me to tag along.

My ticket for Baby Doll at the Balzac

When the Balzac opened at 1 rue Balzac, just off the Champs-Elysées in May 1935, it seemed to begin a new era of absolute modern comforts in film viewing. Arbiters of such things took note, so much so that a remarkable journal published in Algeria, Les Chantiers Nord-Africains: Architecture, Decoration, Urbanisme, Travaux Publics (which can be roughly and clumsily translated as North African Construction Sites: Architecture, Decoration, Urbanism, Public Works) published an extended article on the Balzac and its architect, Maurice Gridaine. In fact thanks to Chantiers, we can get a sense of what a new, ultra-modern exhibition site looked like in the 1930s, its amenities, its lobby, its seating arrangement.

First, though, Gridaine himself gives us an example of a successful French architect’s engagement with the cinema during the 1930s. Gridaine designed a number of buildings throughout France during the first half of the twentieth century, including apartment complexes and public spaces like the Palais Croisette, a convention center in Cannes. He also repurposed existing spaces, at least twice in Paris turning them into cinemas. In 1936 Gridaine modernized and redesigned La Scala music hall in the tenth arrondissement, making it into a cinema. As Chantiers tells us, he also modified the famous Brasserie Universelle on the avenue de l’Opéra in the second arrondissement, dividing its vast spaces and turning one part of it into a film exhibition site, Le Studio Universel. And he built cinemas from scratch; in 1933, before the Balzac, he designed the exquisite neighborhood art deco cinema, Ornano 43, named for its address on the boulevard Ornano in the 18th arrondissement.

Reporting on the brand new Balzac, Chantiers extolled its functionality and elegantly simple modern design. The space itself was not imposing, only around 2500 square feet arranged in two semicircles for the lobby and screening area. High ceilings gave the feel of open air, and there was a well-placed ticket booth inside, as well as accessible but unobtrusive restrooms. A smoking room—what Chantiers called “a sort of boudoir”—gave patrons a space to enjoy a cigarette or wait for friends (at least as far as I can tell, Paris cinemas typically disallowed smoking except in designated areas, because of the combustible tendencies of nitrate film).

There were around 650 seats in the semicircle of the screening space. Paris had some much larger cinemas (the Gaumont-Palace had a capacity of about 6500, the Rex around 2800), but this would be, more or less, a standard number of seats, even for an important first-run site like the Balzac. Also as in many of the city’s cinemas, there was typical, armchair-style seating (designed by Gridaine) and also “strapontins,” or fold-down seats, in the case of the Balzac around 550 of the former and 100 of the latter, which came in handy for particularly popular films.

The Balzac was no multipurpose space, and in fact this helped give it a modern resonance for Chantiers. Gridaine placed no stage in front of the screen, where live acts might perform; this was only a location for showing movies. And unlike most of the great cinemas of Paris, this one was air conditioned, an engineering luxury that made it perfect for patrons during hot Parisian summers, more in keeping with the cinemas of the United States than with France.

Le Balzac, as it was featured in Les Chantiers Nord-Africains in January 1936

The first film shown at the Balzac, in May 1935, was a major one, King Vidor’s latest, The Wedding Night with Gary Cooper and Anna Sten. Typically the Balzac specialized in American films with French subtitles, another one of the major exhibition sites in Paris that would anger intellectuals and critics who felt that many of the best cinemas in the city refused to show French movies. Like all of the cinemas in Paris the Balzac closed just before the surrender to Germany in June 1940, but the Nazis reopened the cinema quickly, and it became a site for films from France as well as from Axis countries, both new and in reissue. In August 1942, for instance, the Balzac screened a 1940 Italian film, Alerte aux blancs (Senza cielo), with Isa Miranda and Fosco Giachetti, and a few months later, in December, showed the newly released French mystery, 8 hommes dans un chateau.

During the Occupation of Paris the Nazis understood the importance of the locations of popular culture, and used some of the most prominent theatres and cinemas in the city to stage spectacles of Franco-German cooperation. They chose the Balzac for just such an occasion in 1942. In September they put on a benefit at the cinema for wounded and repatriated French prisoners of war before a screening of Le Mariage de Chiffon, a Claude Autant-Lara comedy that had opened at the Balzac a month before. With proceeds going to the returning prisoners, ticket prices increased to the French equivalent of about two dollars, but for that price patrons were able to mingle before the screening with celebrities like the actor and writer Jean Granier and the actress Laura Diana.

After this display of German benevolence, the Balzac seems to have returned to business as usual for the duration of the war, and following the Liberation maintained its place as one of the exclusive cinemas of Paris. Listings from the period are difficult to find, but the Balzac apparently returned to pre-war form and showcased American films. In one of the few listings I’ve located, from the week of January 15th 1947, the Balzac presented what was probably the French premiere of the 1943 film with Randolph Scott and Claire Trevor, Les Desperados (The Desperadoes), in English with French subtitles.

The Balzac has changed but has managed to survive since then. An old Pariscope from August 1989 lists the cinema as “Les Trois Balzac,” probably indicating that it had been divided into three screening rooms, and indeed three films were playing there at the time: La Porte du paradis (Heaven’s Gate [1980]), a movie from Burkina-Faso, Yaaba (1989), and Marlon Brando in L’Équipéé savuage (The Wild One [1953]). By June 1994, a renovated and remodeled Balzac apparently had been rearranged into two screening rooms, one showing a Fellini festival and the other, the “Salle panorama,” featuring the newly released French film Les Patriotes. About 20 years later, in June 2013, there were three screens once again, with one of them, the “Grande salle,” clearly for films that might count as special events, in this case the new Italian movie La Grande bellezza, which was preceeded each evening by a classical saxophone concert. 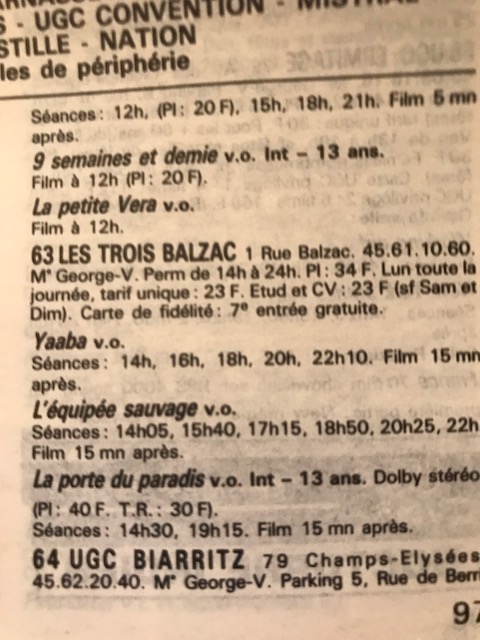 An August 1989 listing in Pariscope for “Les Trois Balzac”

Returning to Baby Doll at the Balzac in 1980, what I remember most about the screening is not so much the cinema itself, or the film, but that Kazan was there, and sat in the row in front of me (although he left before the movie ended). What we know now about the Balzac during that period is attributable mostly to the work of Jean-Michel Frodon and Dina Iordanova in their wonderful book Cinemas of Paris (St. Andrews, 2016). When I went to see Baby Doll, the Balzac recently had been named an “Art et Essai” cinema, a status designating a location as a significant one for showing aesthetically and politically important, challenging films. The Balzac was managed at the time by Frédéric Mitterand, a film critic and the nephew of the leader of the French socialist party who would soon become the president of France, François Mitterand. I was in Paris for that election, too, in May 1981, towards the end of my year of graduate study. In the center of Paris, where I lived, the celebration seemed to be nonstop, and the police closed off a number of streets to try to keep everyone under control. That was a far different scene from the election night six months before, when Paris remained somber, and a special screening at the Balzac provided some respite from the depressing political events back home.

Le Balzac as it looks today