When we think of the cinematic built environment of Paris, of course the exhibition sites come to mind. Those were the places that so transformed the look of the city between 1895 and 1935, from the palaces like the Rex in the second arrondissement, the Marignan in the eighth, or the Gaumont Palace in the eighteenth, to more intimate spaces like the Ornano 43, also in the eighteenth, or the Ursulines in the fifth. But just as importantly, although much more invisibly, most major film companies, from France, the United States, Germany, and elsewhere, had offices in Paris, as a means of handling French distribution, publicity, and other matters. These spaces made up the real business end of French film, even more than the cinemas where movies were shown.

We know this from the Annuaire général des lettres from 1932. The Annuaire, published yearly, was an obsessively complete document, accessioning and compartmentalizing everything about the theatre, literature, cinema, and museums, including not only practitioners but critics, libraries, prizes, and even writers’ pseudonyms (and in France at the time, there were plenty). The Annuaire also provided the personal addresses for writers and filmmakers. In fact, had you been so inclined at the time, you could have planned a short walk starting at Claude Autant-Lara’s apartment at 66 rue Lepic in the eighteenth arrondissement towards the northern edge of the city, moved just slightly to the west to Julien Duvivier’s at 13 avenue Stéphane Mallarmé in the seventeenth, and then headed down in the direction of the Seine and visited Germaine Dulac and Jean Renoir, both in the eighth, at 46 rue du Général Foy and 30 rue de Miromesnil. 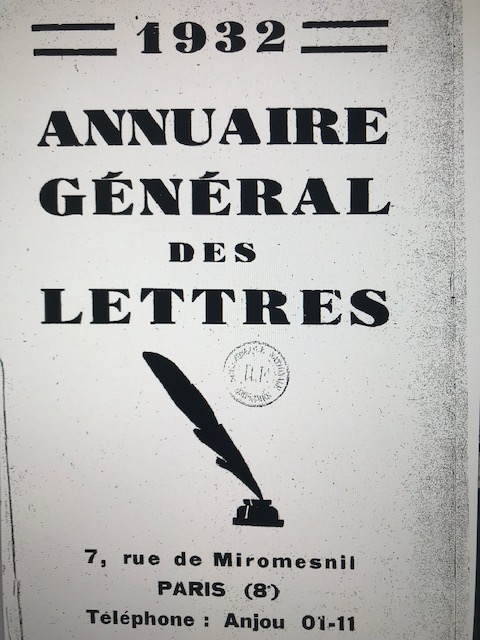 There were also studios in and around Paris, including those we still know today, like Gaumont-Franco-Film-Aubert in the nineteenth arrondissement and the Pathé Studio in the sixth (the Pathé cinema gate at the studio entrance, at 6 rue Francoeur, is still there). Paris was the home for other, smaller studios that we know less about now, like the Studio de Montsouris in the fourteenth, or the Studio Nalpas, just down the block from Autant-Lara’s apartment on the rue Lepic. Almost certainly because of the space required, other studios were outside the city; the Paramount studio in Joinville, most famously, but also film impresario Jacques Haïk’s studio in Courbevoie, a few miles away from Paris, and the Braunberger facility in Billancourt, one of the city’s western suburbs.

Naturally enough, directors lived throughout Paris, and the film studios were in different parts of the city and just beyond its borders. But most of the thirty movie companies listed in the Annuaire were headquartered in just two neighboring arrondissements, the eighth and the ninth. These were two of the more well-heeled areas of the city, and they were home to some of the most important film companies as well as some of the smallest. There were nine companies in the ninth, including three from Hollywood: Fox on the rue Blanche, MGM on the rue Condorcet, and Paramount on rue Meyerbeer, perhaps not coincidentally just a few blocks away from the cinema that the studio owned, the Paramount on the boulevard des Capucines. There were also companies in the ninth that, while in the geographic center of film activity, were nevertheless on the margins of French film culture. There was Apollon-Film, for instance, as well as Super-Film and also Luna-Film, which specialized in “comedies filmées,” probably short movies that accompanied features. Louis Nalpas, who occupied part of the wide middle-ground of French film production, had his main office on the avenue Trudaine, literally and figuratively in the shadow of MGM just a couple of blocks away. 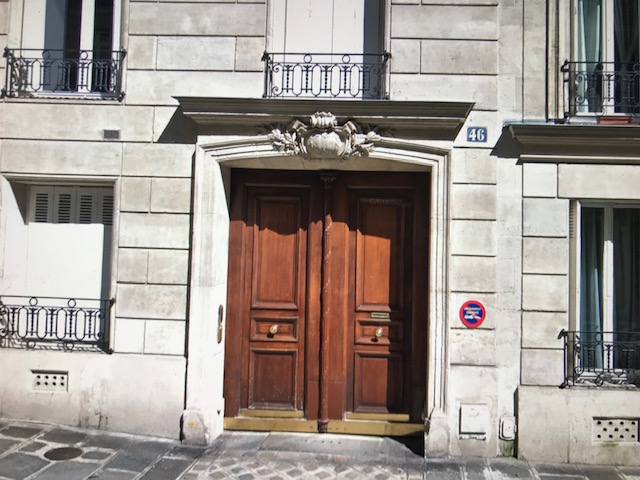 There were nine companies, as well, in the eighth arrondissement. The most imposing was Warner Bros. on the rue de Courcelles, while six companies had headquarters on the avenue des Champs-Elysées, which stood out as the most important cinematic thoroughfare in the city. The film company Osso, which produced its own films and also distributed those from the Hollywood studio Columbia, was there, as was Tobis, the German corporation, as well as the Société Indépendante de Production, all near the major cinémas d’exclusivité on the avenue, including the Marignan, the Normandie, and the Cinéma des Champs-Elysées, the first-run sites that showed the most important films.

The building where Paramount had its French office, on 1 rue Meyerbeer in the ninth arrondissement

Absolute ground zero was at 63 avenue des Champs-Elysées. The large building there still exists, and currently is the headquarters for IranAir. But in 1932, Jacques Haïk had his company’s main office there, and so too did Synchro-Ciné and the Société Générale de Cinématographie.

There were other headquarters throughout the city. Gaumont, one of the largest of all French film firms, had its offices in the eighteenth arrondissement, not far from its flagship cinema, the Gaumont-Palace. The Société des Films Albatross, which had produced films by René Clair and would go on to finance Renoir’s Les Bas Fonds (1936), had its main office in the seventeenth.  Then there were the offices for smaller companies that we know so little about today, like Venloo in the scond, or L’Écran d’Art in the seventh.

The building at 93 avenue des Champs-Elysées, which housed so many film offices in the 1930s, is now the headquarters for IranAir

The Annuaire mentioned no literary headquarters. There were lists of newspapers and literary journals, and their offices in the city. There were also translators, illustrators, and editors. But the Annuaire named no publishing offices, in Paris or elsewhere in France. This might tell us something about French perceptions of the cinema and literature at the time, the former as an undertaking that required both artists and bureaucrats, creative spaces as well as offices. These film headquarters probably were indistinguishable from law offices, or those for banks or insurance companies or art dealers, and they almost certainly occupied spaces in some of the same buildings.

Let’s return for a moment to Jacques Haïk. He built the spectacular, 2800-seat Rex cinema in 1932, just when the edition of the Annuaire that I’ve consulted here appeared. The Rex dominated the space on the boulevard Poissonnière, and inside, audiences watched not only movies but fantastic floorshows, often featuring the cinema’s own dance company, while during quiet moments they might contemplate the ceiling, with its representation of the stars and planets. The Rex, which still stands, certainly marked Haïk’s importance to the Parisian cultural scene. But it was the activity at his main office, in a distinguished but sedate building, that made his cultural contributions possible, in just the same manner that headquarters nearby and in various parts of the city allowed MGM, Warner Bros., and Gaumont, as well as Venloo and other companies, to conduct business-as-usual in Paris.

The Rex cinema in the second arrondissement