“I saw one gentleman in the audience very solemnly unfold a newspaper, take out a matchbox, strike a match, and light the newspaper, with the clear intention of setting the cinema on fire.” That’s how Jean Renoir remembered the 1939 premiere of La Règle du jeu (The Rules of the Game) in Paris. Underscoring that apparently disastrous first night, Renoir added that the failure of the film “was complete and resounding” (Renoir’s remembrance is available at https://www.youtube.com/watch?v=69woK9y8oTQ). Indeed, La Règle du jeu has come down to us as one of the more impressive flops in French film history, made even more significant because of the film’s now-canonical status. Part of the problem was that the film cost so much to produce, making it difficult to ever turn a profit. There was also intense anticipation for La Règle du jeu, among critics and other filmmakers and even among average fans, because Renoir’s previous films, La Grande illusion (1937) and La Bête humaine (1938), had been such huge hits; in the case of the former film, Renoir’s great World War One drama, the success had been on an international scale rarely achieved by a French movie.

There is no question that the opening of La Règle du jeu was problematic. Immediately after that first night, Renoir cut almost 20 minutes out of the film, to make this story of a decadent French bourgeoisie more palatable and more understandable. We also know, however, through the work of Renoir’s most recent biographer, Pascal Mérigeau, as well as other scholars, that the story of the failure of La Règle du jeu has been at least somewhat embellished over the years, partially by Renoir himself. So just how did the film do in Paris and the rest of France, and what was its reception once it moved out to France’s colonial empire? 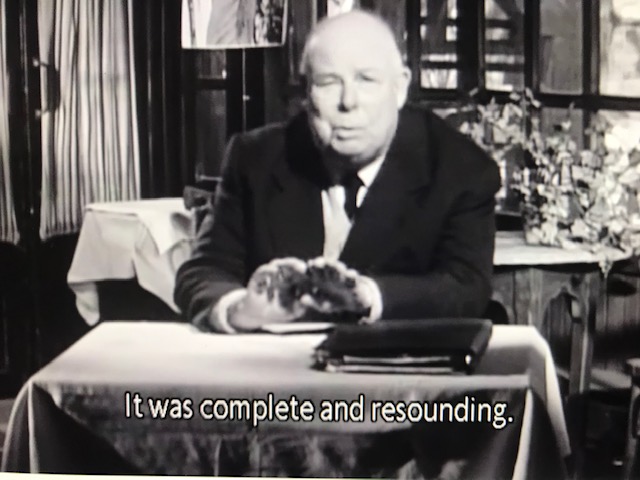 After months of hype in the press, La Règle du jeu opened in Paris as an invitation-only gala on July 7th, 1939, and then screened for the first time for the general public on July 8th.  Renoir himself took part in public events surrounding the first showings of the film. Also on July 8th, for instance, he presided over a screening of Joris Ivens’ documentary about China, 400 millions (1939), at the Salle Pleyel, a concert hall in the eighth arrondissement that doubled as a cinema for special events like this one.  La Règle du jeu played at the Colisée cinema at 38 avenue des Champs-Elysées in the eighth arrondissement and also at the Aubert-Palace at 24 boulevard des Italiens in the ninth. These were not among the largest cinemas in Paris, but they were both quite prestigious sites, in two of the most important areas in the city for seeing major films. It was unusual but not unprecedented in Paris for a film to open in two cinemas, but the other conditions of the first showings of La Règle du jeu are unlike anything else I’ve seen. At the Aubert-Palace, the film showed as one might assume, with the expectation that an exclusively French-speaking audience would come to see it. At the Colisée, however, audiences saw a version with English subtitles, indicating, apparently, that there were British and American tourists in Paris, as well as expats, business people, and members of the diplomatic corps, with an interest in seeing the latest and most anticipated movies.

In previous blog posts, I’ve discussed films like L’Ange bleu (The Blue Angel [1930]) and L’Opéra de quat’sous (The Threepenny Opera [1931]) that screened simultaneously at the same cinema in different languages, with German and French versions alternating (see my post from October 21st, 2015). When studios like Paramount made both French and English versions of films in the early-1930s, the ritzy Madeleine cinema in the eighth arrondissement would often choose to screen the latter rather than the former. But to my knowledge there was not another French film like La Règle du jeu, screening with subtitles in any language.

Perhaps because of a limited audience for this subtitled version of Renoir’s film, La Règle du jeu left the Colisée the first week in August 1939, to be replaced by Monsieur Brotonneau (1939), a significant film because of its stars, Raimu and Josette Day, and which opened nowhere else in the city. To the extent that information is available, it seems that Monsieur Brotonneau showed as French films typically did in Paris, without English subtitles. Throughout August, however, La Règle du jeu continued to play at the Aubert.

The Zara Home housewares store at 38 avenue des Champs-Elysées, the site of the Colisée cinema where La Règle du jeu, with English subtitles, opened in Paris

The latest available newspaper listings, from September 2nd, 1939, show that La Règle du jeu was still showing there. Of course, France declared war on Germany the following day. The next listings I’ve found come from January 3rd, 1940. By that time, with the Germans advancing on Paris, the Colisée had closed, as had so many other cinemas in the city, while the Aubert showed Deuxième bureau contre la kommandantur (1939), a French espionage drama.  La Règle du jeu had, by that time, disappeared from Paris.

The nearly month-long run at the Colisée, and at least two months at the Aubert, would seem to indicate that La Règle du jeu wasn’t a complete failure in Paris. But many films had openings that lasted much longer than that. Indeed, as La Règle du jeu continued at the Aubert, a reissue of Renoir’s La Bête humaine played just as long, at least until the beginning of the war, at the Gaumont-Théâtre cinema in the second arrondissement.  As Merigeau indicates in his biography of Renoir, reviews of La Règle du jeu were mixed, and typically divided along ideological lines, with rightwing newspapers like Le Figaro, for instance, criticizing the film and leftwing periodicals supporting it, and this may have had some impact on audiences. It’s also fully possible that the war changed the movie-going habits of Parisians, enough at least to affect the boxoffice not only of La Règle du jeu but other films as well.

Whether or not the film was a hit in Paris, when Le Règle du jeu went elsewhere it was still a very big deal. When the film opened in Rennes in Northwestern France in mid-August 1939, the region’s newspaper, L’Ouest-Éclair, gave it a significant writeup, mentioning the film’s widely varying reception in Paris.  L’Ouest-Éclair then added, somewhat obliquely, that, “Frankly, we didn’t expect the director of La Grande illusion to make a film like La Règle du jeu.” In December 1939, Renoir’s film arrived in Casablanca, along with Algiers often the first stop on any French movie’s route through North Africa. Just as in Paris, La Règle du jeu opened in two cinemas, one with the same name as the Parisian exhibition site, the Colisée, the other the Triomphe. As a sign of the vibrant film culture in the region, the movie that played at both cinemas just before La Règle du jeu was the great Marcel Carné film, Le Jour se lève (1939). The advertising in newspapers for La Règle du jeu assumed a knowledge on the part of filmgoers in Casablanca of Renoir’s movies as well as his reputation, listing three of his previous masterpieces, La Grande illusion, Les Bas-fonds (1936), and La Bête humaine.

As unusual as it was at the time, opening La Règle du jeu in two cinemas seemed standard practice. When the film arrived in Algiers in February 1940, it once again played at a cinema called the Colisée, and also at the Vox. These two cinemas seemed linked generally, as Renoir’s film replaced another one—Moulin Rouge (1940)—that had also played at both sites. The newspapers in Algiers acknowledged La Règle du jeu as a significant event, with the advertising in the daily L’Echo d’Alger calling it “a film unlike any other” (un film pas comme les autres) and highlighting Renoir as the director (the ads for Moulin Rouge stressed only the actors and the “sparkling dialogue”—dialogues étincelants—of screenwriter Yves Mirande). La Règle du jeu seems to have played for a week in Algiers, a typical opening run in the city; Moulin Rouge had also shown for a week. Renoir’s film returned to Algiers a few months later, in May, this time at the Roxy, and on a double-bill with another reissue, John Ford’s Toute la ville en parle (The Whole Town’s Talking [1935]), with Edward G. Robinson and Jean Arthur. Just as they were in Paris, such reissues were common in Algiers, but indicate that La Règle du jeu had generated at least some interest and enthusiasm during its opening a few months before.

Without access to boxoffice records, from Paris or Rennes or Casablanca or Algiers or anywhere else the film played, it’s impossible to get a sense of the success or failure of La Règle du jeu. What we are left with, though, is the record of a film that generated intense reactions from those who did see it. The great film historian Georges Sadoul, writing in the French weekly magazine Regards in July 1939, extolled the virtues of the film, and then described his own confusion. “I confess,” Sadoul wrote, “to be unable to understand how a work so alive and in many ways so traditional—in the best sense of the word—could have provoked, during its first screenings, actual demonstrations that set one group of viewers against another, something we have never seen in the cinema.” 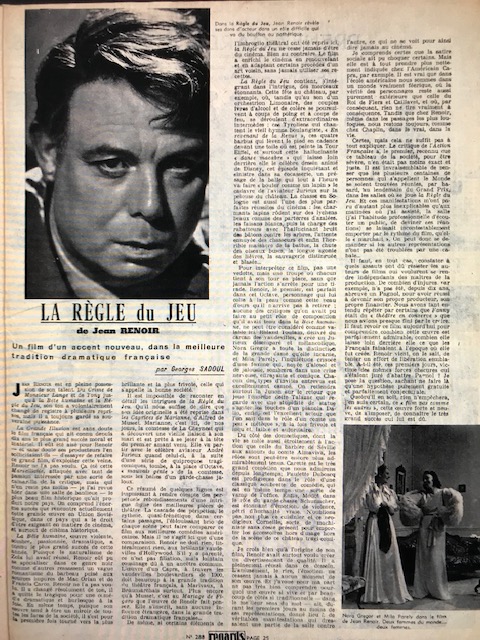