When I arrived in Paris for the first time in September 1980, I was stunned by all of the cinemas there. I had grown up in Los Angeles, so I was used to living where there were hundreds of movie theatres. But I wasn’t accustomed to the concentration of cinemas that I found in Paris, or to cinemas in the midst of residential neighborhoods. I could walk a couple of blocks from my apartment on the rue Ste. Croix de la Bretonnerie in the fourth arrondissement, and have a bunch of options for seeing movies.

I lived in Paris until the summer of 1981, and I kept a record of the movies that I saw, and I have vivid memories of the cinemas I typically went to; Action Christine in the sixth arrondissement, Action Écoles in the fifth, République in the ninth, the Marais in my own neighborhood, and the Cinémathèque française screening room nearby in the Centre Georges Pompidou (I’ll write a post soon about the cinémathèque at the time) . These were mostly cinemas that showed older films, reprises of movies from Hollywood, France, and elsewhere rather than the cinémas d’exclusivité that showed the newest films. But I didn’t save any film listings from my year there that would show the cinemas and their addresses, so I hadn’t been able to chart the cinematic geography of Paris from the period.

In fact, at least for the film historian working in the United States, it’s easier to map Parisian cinemas from the 1920s and ‘30s than it is from the 1980s and after, because of the materials that are available and those that aren’t. A few months ago, though, I found some issues of Pariscope on an extremely valuable online source for this kind of thing, Ebay. 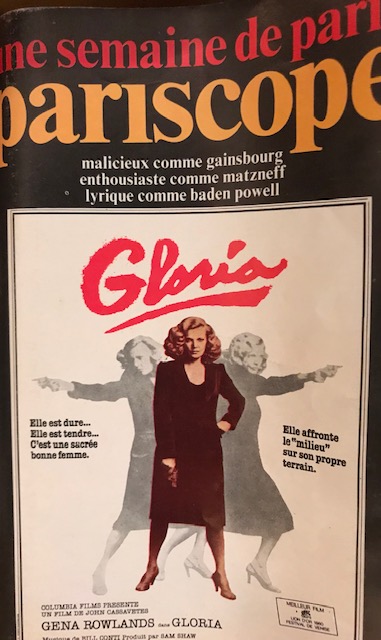 Pariscope is still being published, and it remains a terrific listing of all of the cultural events in Paris each week. When I was a student forty years ago, I’d buy a new issue each Wednesday. There was another weekly much like it at the time, L’Officiel, and my sense then was that the choice you made, between one or the other, was practically as charged as the choice between Positif and Cahiers du Cinéma in the early 1960s. I’m not sure exactly how I fell into the Pariscope camp, but I do remember that the listings seemed much more legible and sensibly organized than the ones in L’Officiel.

Each week, Pariscope ran Le Hit Parade des Critiques, a listing of the major film critics in Paris and how they rated new films (from one star to three). Then there would be lists of new films that had been playing in Paris for a few weeks, films that were just opening in the city, film festivals, and pages and pages of reprises. Pariscope also ran separate listings of films by genre, and indicated those movies forbidden to viewers under eighteen, including not only conventional “adult films” that the magazine treated with the same respect as American classics, but also films like Oshima’s L’Empire des sens (1976), which played at the St. André des Arts cinema in the sixth arrondissement the first week of 1981, according to my Ebay Pariscope (for a little more on the St. André des Arts, see my post from January 28th, 2019).

Pariscope numbered all of the cinemas in the city, and listed them by arrondissement. In the issue covering that first week in ’81, cinema number one was the Chatelet-Victoria in the first arrondissement, and the last cinema, number 256, was the Tourelles in the twentieth. There were, then, that many cinemas in the city, and many of those had more than one screen. The St. André des Arts, which showed Oshima’s film and which was very much a neighborhood cinema, had two rooms, and even some of the most important exhibition sites housed multiple cinemas. The Marignan, for instance, on the Champs-Élysees, which had been one of the largest in Paris for decades, now had seven different rooms, and that week in January showed, among other films, Superman II (1980), Fame (1980), and Truffaut’s Le Dernier Metro (1980).

For at least a few years, the number of cinemas in Paris had remained fairly stable. A Pariscope from the end of July 1977 lists 257 sites for seeing movies. The last complete listing I have before that is from thirty years earlier, January 1947, from the film magazine L’Écran français. About a year-and-a-half after the end of World War Two, there were 307 cinemas in Paris. So for at least that three-decade period, the exhibition map of the city stayed fairly stable, especially considering the significant downturn the French film industry experienced during the 1950s and ‘60s. Nevertheless, the concentration of cinemas had changed, at least in some areas. In 1947, for instance, there were only nine cinemas in the fifth arrondissement. By 1981 there were twenty-seven. While there had been twenty-two cinemas in the twentieth arrondissement, thirty years later there were just three (the Tourelles, the Bellevue, and the Gambetta were the only sites to last the whole time). Other areas in Paris had hardly changed at all. There were twenty-three cinemas in the eighth arrondissement in 1947 and twenty-five in 1981. In my old neighborhood, the fourth, there had been six, and when I moved in there were four.

The great shift in Parisian film geography took place over the next ten years. I went to Paris again in 1989, and this time I saved some issues of Pariscope. By then the number of cinemas had gone down by half, with only 129 exhibition sites in the city. In the twentieth arrondissement there was just one, the last cinema listed in Pariscope, the Gambetta. I haven’t looked exhaustively, but I don’t doubt that far more cinemas had sub-divided by then, so there were certainly many more screens than that, but the movie map of the city had changed considerably. In the fourth arrondissement there were only two cinemas left. The Marais cinema, where I had gone so often, had become Le Latina (now it’s called the Luminor).  The other, the Salle Garance, named for the character Arletty played in Les Enfants du paradis (1945), was in the Centre Pompidou, probably the same screening space where the Cinémathèque had been for a few years, and where I had spent so much time.

The Luminor cinema on the rue du Temple in the fourth arrondissement, which had been the Marais cinema when I lived nearby

I can chart the cinematic geography of Paris from my subsequent visits. There were 110 cinemas in 1994, and that number held firm through 2002, when the Gambetta, still the only cinema in the twentieth, showed movies in one large space and six smaller ones. By 2015, a very slimmed-down Pariscope showed only 83 cinemas, although now the Gambetta had been joined in the twentieth by the Étoile Lilas. Of course, there is still an extraordinary film culture in the city, but the overwhelming presence of the cinemas themselves that so struck me in 1980 is gone now. And while trying not to be too nostalgic, I also miss the sheer volume of the old Pariscope, which, in my memory at least, used to take hours to get through, to underline, and to take in the possibilities until the following Wednesday.