We see images of a rundown Paris, mostly on the northern outskirts of the city, with the one identifiable street, the rue de Chartres, on the periphery of the eighteenth arrondissement. Men walk around, talking to each other and smoking, while a percussive, jazzy score plays in the background. An offscreen narrator says that, of more than half a million North African immigrants in France, some 250,000 live in these outer parts of Paris and in the bainlieu, or suburbs, close by.  They live mostly in shabby hotels or shacks, they work, and they go to the movies.

This is the beginning of Paris Arabe et ses cinémas, a film by Roger Boussinot and Jacques Nahum, and, apparently, an episode in the French television series Démons et Merveilles, which aired on France 2—one of the country’s two television networks at the time—in 1969. I’ve been able to track down only one other episode of the series, Portrait de Nicole Védrès, from 1964, about the director of the great documentary Paris 1900 (1947). Paris Arabe et ses cinémas is available online at https://vimeo.com/399498845, but I don’t think anything has been written about it, at least in American or French sources, in fifty years, since Le Monde published a short review when the program first ran in November 1969. I learned about the film from my colleague at the University of California, Davis, Anjali Nath.

Both Nahum and Boussinot had long careers in France, mostly in television as producers, writers, and directors. Nothing in their filmographies seems to match Paris et ses cinémas, which was a kind of Jean Rouch-inspired anthropological investigation into the moviegoing habits of North Africans in France, and more precisely North African men.

The narrator tells us that there are about forty cinemas in France that specialize in Arab films, and that ten of them are in and around Paris. The scene shifts to men lining up to see a movie, and the narrator asks one of them, “It’s Sunday afternoon. Do you go to the cinema often?”  The man looks a little suspicious, and then says, “From time to time.” The narrator asks if he prefers American or Arab films, and the man quickly replies “Arab.” He has trouble understanding American films, and besides, there’s too much fighting in them. In Egyptian films, though, there are songs and dancing, and sometimes the girls take their clothes off.

This question about preference will be a constant of the interviews, and the men always choose Arab films. And Arab films will almost always mean Egyptian films (following the Algerian War that began in 1954, films no longer moved back and forth between France and Algeria). There are movies starring Mahmoud Abdel Aziz, Samia Gamal, and other Egyptian stars. The men in the audience are from Algeria or Morocco or Tunisia, and not all of them can understand the language in the movies. Many have to rely on the French subtitles, while others, who are unable to read French, have buddies who narrate.

“In Egyptian films, there are women who dance nearly naked”

One man, who has been in France since 1959, says that, “In our films,” meaning Arab movies, “there’s dancing and singing. They remind me of home.” He sends most of his money back to his family in Algeria but keeps a little for himself. He lives alone, in a hotel nearby, and when the narrator asks him what he likes to do, he says “Cinema.”

The men go to see films from countries other than Egypt; Le Roi des rois (a reissue of King of Kings [1961]) figures prominently here, as does a film starring Ingrid Schoeller, who made a series of German spy movies during the 1960s. One man says he likes comedies mostly, “with the American Jerry Lewis, and also Fernandel.” But as much it details the movies they go to see, the film is also about the men’s lives outside the cinema, the entertainment industry that fills their leisure time, and the racism they face in France.

Almost all of the men are single or have wives who are still in North Africa. They send most of the money they earn back home, which gives them just enough for a movie now and again. One man, a hairdresser in the suburbs, says he used to go to the movies all the time, but not now. The narrator asks why, and he says, “I’m married.” In fact, the narrator says that, in Nanterre, the bainlieu where so many Algerian, Moroccan, and Tunisian immigrants live, the space is divided in half, one part for single men, the other for married men and their families. There is one young Algerian man, though, who frequently brings his French wife to the cinema. She stands by him, very quietly, as he explains that she likes Arab films. But he goes on to say that his family back home has refused to accept her, because she is French, and that the situation for North Africans has only gotten worse in Paris, and the rest of France, since Algerian independence. 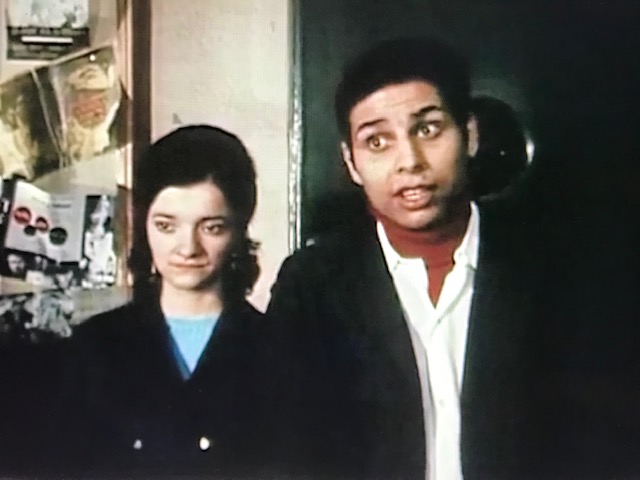 The Algerian man who brings his French wife to the movies

There are reasons besides marriage why some men don’t go to the movies. One claims that all of the films are old, and that he saw them when he lived in Morocco. He has a television that he uses for entertainment; he runs it off a battery, because in the bainlieu where he lives, he has no electricity.

The film concentrates on one cinema, Les Variétés in Argenteuil, a bainlieu just north of Paris, above the eighteenth arrondissement. The narrator asks the owner, a white Frenchmen, when he had the idea to make this a cinema specializing in Arab films. It was, for him, a matter of simple economics. He was facing closure, because there was no more audience for French films. Now, his audiences come from the nearby bainlieu where North African immigrants tend to live, and he can stay in business even though the French in his own neighborhood have no interest. He goes on to say that his clientele willingly does the work that the French won’t do. “These aren’t bad guys,” he says.

The narrator asks if the audience is all male, or if there are any women, and the exhibitor replies, “Very few.” When asked why, he doesn’t know, and suggests that, maybe, “it’s a question of custom, and how women are treated.” The employee in the ticket booth confirms that North African women just don’t come to see movies there.

Some of the audience at Les Variétés cinema

Despite the narrator’s reasonable claim that there were other cinemas in Paris and around the city that primarily screened Arab films, I haven’t been able to find them. Listings from the period, however, can be extremely hard to track down. I have only one complete set, from the Pariscope for the week of September 12, 1967, when there were no Arab films showing in the city. In the eighteenth arrondissement, for example, where Paris Arabe et ses cinémas begins, there are only American films (El Dorado [1966], among many others), French films (including Les Demoiselles de Rochefort [1967]), and several Italian films (077 Espionnage à Tanger [1966], Un dollar entre les dents [1967], and Mission secrète pour Lemmy Logan [1966]). Pariscope typically provided only sketchy lists for a few bainlieu, and nothing for Nanterre or Argenteuil, which were probably the locations for most of the cinemas catering to North African men.

In the twenty-five years or so after World War Two, there were a few French efforts to assess the audience for movies, in both local and national terms. In 1947, for instance, the Gaumont company polled spectators at the flagship Gaumont Palace cinema in Paris, to determine their film preferences, what they were willing to pay for movies, how they got to the cinema, and where they lived. Then in 1954, the French government commissioned L’Étude de marché du cinéma français, a study using the period’s advances in demographic science to chart the dwindling French film audience. Both of these studies are marked by the absence of race as a factor in understanding film viewers. This makes Paris Arabe et ses cinémas all the more remarkable, even though there are certainly flaws in the film. It tends to collapse all North African culture into a unified whole, smoothing out the differences between Algeria, Tunisia, Morocco, and elsewhere in the region, and also those differences—ethnic, religious, class—among the men from any of those countries. The attention, though, to issues of race and racism, and to the lasting effects of French colonialism, makes Paris Arabe et ses cinémas, virtually unknown and unseen today, a significant model for the examination of film culture and the broad implications of what it means to go to the movies.

106 boulevard Jean Allemane in Argenteuil, the thrift store on the site of Les Variétés cinema