When French movie star Gaby Morlay sued a café in Montmartre in 1933, it was national, and even international, news. The café, on the rue Fontaine in the eighteenth arrondissement, recently had unveiled a new, comic fresco by poster artist Jean-Dominique Van Caulaert, called Chez les nudistes (Among the Nudists), an apt name for the caricatures of French celebrities posed au naturel. There was tennis champion Suzanne Lenglen, playwright and filmmaker Marcel Pagnol, actress Maud Loti, and music hall performer Lucien Boyer. There was also playwright Henry Bernstein, and in his arms, unmistakably, Gaby Morlay. She hadn’t modeled for the fresco, and she was not amused. She filed a legal case against the café with Le Tribune civil de la Seine, one of the most powerful courts in France’s extraordinarily dense judicial system. In February, 1933, Le Tribune ruled in favor of Morlay, determining that the café owner must place a drape over that part of the fresco that depicted the movie star. 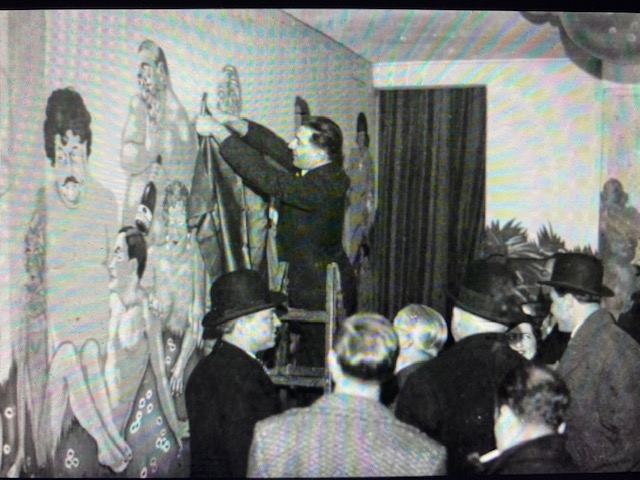 And, indeed, Morlay was a very big star. A twenty-year old Morlay made her film debut in 1913 in Les Vacances de Max, which starred Max Linder, one of the greatest international stars of that era. Fifteen years later, in November, 1928, she would be important enough to appear on the cover of the first issue of Pour Vous, which would become perhaps the most important French film periodical of the pre-World War Two period. She shared that cover with the great director Jacques Feyder, with whom she worked on Les nouveaux messieurs (1929). In the next few years leading up to Chez les nudistes, she also made movies with such distinguished filmmakers as Maurice Tourneur (Accusée…levez-vous! [1930] and Maison de danses [1931]) and Paul Czinner (Ariane, jeune fille russe [1932]).

At the time of the dustup over the fresco, Morlay’s last film had come out in the fall of 1932, and her next wouldn’t appear until about six months later. But her movies were always all over Paris, and probably the rest of France. In the last available Parisian film listings I’ve been able to find before the incident at the cafe, from the end of August, 1932, Morlay’s Après l’amour (1931) played at four cinemas scattered around the city.  Faubourg Montmartre (1931) showed at the St. Michel in the fifth arrondissement and the Kinérama in the third, while the Palais des Arts, also in the third arrondissement, screened Ariane, jeune fille russe.

From November 22, 1928, the first issue of Pour Vous, with Gaby Morlay second from left and director Jacques Feyder next to her

Throughout this period, the French film press always gave Morlay the full star treatment, and presented her to the public in the great tradition of movie divas. The monthly film magazine Cinéa ran an interview with the star in March, 1932, highlighting her need for new adventures and her not always consistent artistic sensibilities. At first, when questioned about recorded sound coming to movies, Morlay pleaded with the interviewer: “Don’t talk about sound film! I don’t believe in it and I could never love it…I loved silent film so much.” Within a few paragraphs, her mood had changed: “Talking cinema is wonderful not only because it brings me closer to my theatrical art, but also because, to play well, I have to exteriorize, to live my role.” After that, she moved on in the interview to her latest enthusiasm, acquiring her “aeronaut’s license,” allowing her to pilot hot air balloons.

The press treated Chez les nudistes, and Morlay’s response to it, as something of a joke. Most newspapers picked up the story on the occasion of placing the drape over that section of the fresco depicting Morlay, an event no doubt advertised by the café owner. The typically sober and serious Le Matin, which covered the case for several days, said about the draping that it seemed like a “grand opening” in Paris, with so many people of importance there—the various lawyers and judges who handled the case or ruled on it, for instance—everyone, it seemed, except Morlay. The royalist newspaper La Liberté lamented Morlay’s absence, and emphasized the party atmosphere during the ceremony. Then, as did other sources, La Liberté let readers know that the café proprietor, along with hanging the drape, had also hung a tongue-in-cheek sign just next to it: “Here, by order of the courts, Gaby Morlay took the veil.” 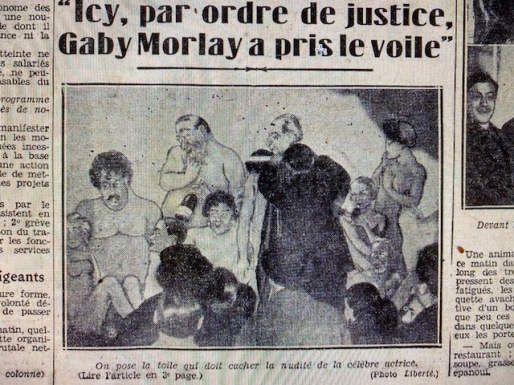 The article about covering the fresco in La Liberté, from February 14, 1933: “Here, by order of the court, Gaby Morlay took the veil”

A month later, in March 1933, the news had reached North Africa. A reporter for L’Africain, which was distributed throughout the French colonies, told readers that “everyone in Paris” (tout Paris) had seen the fresco and had followed the scandal, but that, finally, no law could compel Morlay to be depicted “dressed as Eve” if she didn’t want to be. He also mentioned how difficult it would be for any actress to be seen this way, especially if she had kids who might hear about it. He reminded readers, though, that “Gaby Morlay has no children,” and then added, cattily, “at least as far as I know.”

French legal sources took the case more seriously. Le Droit d’auteur, a monthly review devoted particularly to issues of artistic and literary copyright, wrote up the case quite drily in its issue of August 15, 1933, explaining that it was especially important regarding the rights of the painter and the corresponding rights of the person represented in the painting, and also in clarifying the status of “defamatory” pictures.

Despite the precise legal pronouncements, Le Droit d’auteur was not unaware of the niceties of French linguistic and cultural practice. The article raised the issue of Morlay’s personal rights, because she had been painted as if she “posed as a modèle de profession“ (“professional model”). The more modern, respectable category would have been modèle privilégié, understood to be an artist’s wife or mistress, and without any of the signifying baggage of prostitution that accompanied the other term. 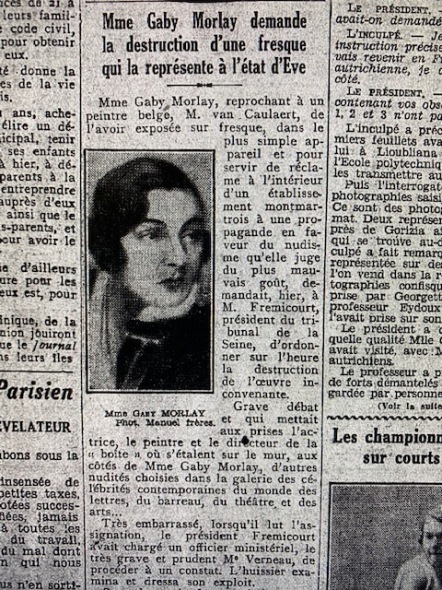 Morlay was involved in other compelling cases over the next fifteen years.  While the café fresco had her in the arms of Henry Bernstein, I have found no evidence that they were ever romantically involved. They did, however, have a working relationship. Morlay starred in the 1932 adaptation of Bernstein’s play, Melo, directed by Paul Czinner. Bernstein sued the production company, Matador Films, because it had made significant changes to the play. Bernstein’s original, for instance, has the heroine, played by Morlay in the movie, poison her husband; the film places the incident more safely within one of her dreams. But Bernstein had signed over the rights to his film to Matador, and the contract stipulated that the company could make all changes that seemed necessary. The playwright asserted his moral right to protecting his work, a claim not without significant power in the French legal system at the time, insisting that he maintained the authority to protect the integrity of his play and to shield it from any attempt to deform it. The court ruled against him, because he had clearly granted Matador the permission to implement changes, making this a fairly simple matter of contract law.

Later there was a much more serious charge, and this one was leveled directly against Morlay. During World War Two, she had a relationship with Max Bonnafous, a significant government bureaucrat in Occupied France (in fact, she would marry him). After the war, because of her involvement with Bonnafous, Morlay was investigated by a committee assessing the collaborationist activities of suspect French citizens, including a number of movie stars. 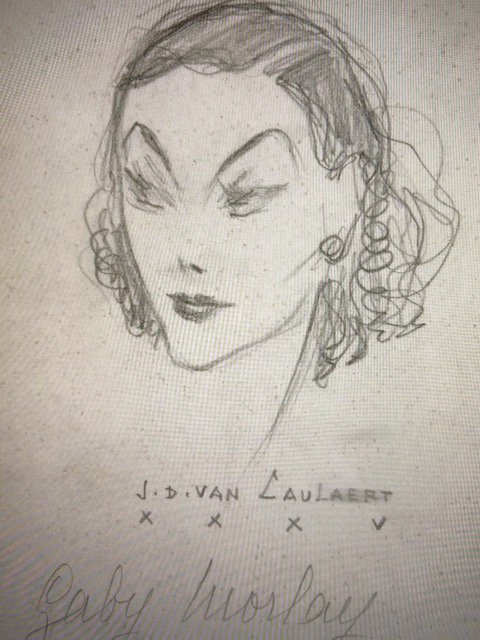 A sketch of Morlay by Jean-Dominique Van Caulaert, who also painted the fresco at the Montmartre café

Morlay, eventually, was cleared. She had worked in the French film industry throughout the war, with such directors as Sacha Guitry (Mlle. Desirée [1942]) and Marc Allégret (L’Arlésienne [1942]). After the war, and despite the charge of collaboration, she continued to work steadily, starring as Tante Alicia, for instance, in the original film version of Gigi, from 1949, and making films until her death in 1964.

She was perhaps never so famous, though, as she was in the early-1930s, when she took offense at Chez les nudistes, and, as Le Droit d’auteur wrote in its discussion of the case, demanded that a covering immediately be placed over “the scabrous image.”